Today’s featured author is S.C. Mitchell, who has written the novel, Pirates of the Dark Nebula. 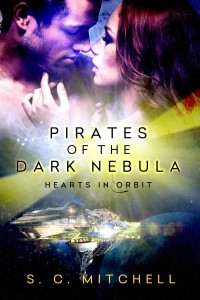 Blurb:
It can’t fall into the wrong hands.   Luna Callista holds the key to a galaxy-changing new technology. Captured by a ruthless band of deep-space pirates, she’s rescued by a man filled with dark secrets of his own. Who is Rik Mazar?   Galactic protector or rogue pirate?   After three years undercover among the Brotherhood of the Dark Nebula, Rik Mazar isn’t sure what side of the law he’s walking. In a world of murder and betrayal, his life goes on the line every day. But, protecting Luna Callista means putting his heart in as much danger as his hide.

A rusting service droid, a Ferang fortuneteller, and a ship full of back-water refugees are their only allies, as two hearts go into orbit to save a galaxy in peril.   HEARTS IN ORBIT: VOLUME 2 – PIRATES OF THE DARK NEBULA is a science fiction romance set in the far-flung space-traveling future, continuing the series’ course across a galaxy filled with love and adventure.
Available now at: http://www.amazon.com/Blarmling-Dilemma-Hearts-Orbit-Book-ebook/dp/B00QHND71S/

He took a step closer and tucked his fist under her chin, raising her lips to meet his. Warm, firm, and enticing. The thrill shot through her core once again as his mouth took her to another place, another world.
Time stopped. Her whole focus was him. Only him. His lips on hers. His hard body pressed against her.

His arms wrapped around her, a comforting cocoon—protection from the cold, dark galactic sector about them. It would be so easy to say it was just comfort and protection she was seeking in this man, but there was so much more to it than that. So much more to him.

Still, she barely knew him. Who was he? What was he?

An actor and a con man, to be sure. So, was this all an act too?

His tongue tangled with hers, plundering ever so sweetly. Damp heat built in her core. The bold press of his erection against her stomach betrayed his arousal. This was no act. He wanted her as much as she wanted him. Did there need to be anything more to it?

“I am tracking an ion storm entering the quadrant, Captain.” Harvey’s monotone intruded into the passion of the moment. She’d all but forgotten the droid was standing behind her.

Rik broke off the kiss. Reluctance colored his gaze. “Thank you, Harvey. Continue tracking. Let me know if it gets near enough to bring us under its influence.” He shook his head. Lowered his voice. “That was probably a huge mistake.”

He sighed, looking deeply into her eyes.

“Oh, I don’t think so, sir.” Harvey’s retort took Luna by surprise once again. “Those storms can get quite intense.”

Rik chuckled, his heated stare still locked onto her. “Yes, quite intense.”

S.C.Mitchell grew up an avid reader of comic books, science fiction and fantasy literature. He’s been writing stories for over thirty years. In 2010 he left his job as a computer desktop support specialist to pursue his passion for writing full time. He is a member of the Romance Writers of America as well as the Wisconsin chapter.

As a writer of paranormal and sci-fi romance, fantasy, and science fiction, Steve crafts unique and wondrous worlds where his characters explore, romp, and fall in love. Whether traveling through dark, demon filled dimensions, the edge of wild space, or ancient mythological heavens, his heroes and heroines, guided by their adventurous hearts, discover hidden strengths on their pathway to enduring love.

Posted by Rachel Sharpe on July 16, 2015 in Thursday Thread

This week’s featured author is Angela Scavone, who has written the novel, A Journey Home.

Book Blurb: Stephanie Tyler’s sole job is to fly overseas to war torn areas of the world to retrieve and escort the bodies of fallen soldiers back home to the United States. It is a tough and emotional job but she is honored for the privilege. Her duty also helps her to escape her past and her failed marriage.

But those flights have become increasingly more dangerous and she is forced to have a partner accompany her. Much to Stephanie’s surprise and dismay, she is partnered up with her ex-husband, Captain “D.A.” Douglas Aston. From the moment Captain D.A. enters the scene, he irritates her. It could have something to do with the fact he slept with her best friend while they were married. As they go on several missions together, Stephanie is forced to be courteous and professional with D.A. even though the very sight of him irritates her beyond comprehension.

Then, Stephanie’s cheating, husband stealing, ex-best friend is killed in Afghanistan and Stephanie and D.A. must escort her body home. While executing this difficult duty, a myriad of conflicting emotions makes Stephanie ponder how short life really is . . . and to question her own ability to forgive.

The phone intercom buzzed and Pam came over the speaker. “Sorry to interrupt, Colonel, but you wanted me to let you know when Captain Aston was here.”
I stared at the Colonel wide-eyed.
He merely smiled and said, “Thanks, Pam. I’ll be out in a minute.”
“He’s here now?” I asked, incredulously.
“Didn’t I mention that?” He rose from his chair and walked to the door as I stood and straightened my uniform.
The Colonel stood with his hand on the doorknob, watching me fuss. “You look tremendous, Captain.”
“What? Oh I don’t care what I look like for him,” I immediately protested, waving my hand in the air.
“Of course.” He was still smiling as he opened the door. “Captain Aston, please come in.”
I heard his voice first. “Thank you, Colonel.”
I glanced down at my uniform to make sure everything was in place before he came into the room. When I looked back up, Captain Aston was walking through the door.
To the female eye, he was a very attractive man. He stood at six-four and was well built, but not so much that muscles and tendons were popping out everywhere. He had a strong jaw and black hair just long enough to run your fingers through. Dressed in full uniform, his handsome features were even more prominent.
Not that I noticed.
“Please come in and we can discuss your new role.”
“Yes, Sir.” Captain DA put out his hand for me to shake, flashing his killer smile that started in his bright blue eyes and ended in a set of mouth-framing dimples. “Good to see you again, Captain.”
I returned his smile and handshake, determined to be professional in front of the Colonel even if it killed me.
Colonel Madison resumed his place behind his desk. “Please sit. This is a quick, informal meeting to get reacquainted with each other.”
I remained on my feet which kept both men standing. “Sir, with all due respect,” I began, facing the Colonel, “I cannot work with Captain Aston.” Apparently, my mouth wasn’t on board with being professional.
“Why not?” DA asked, sounding offended.
I ignored his question and kept my attention on the Colonel, who looked as if he were about to laugh. “We used to be married.”
“I know that.” He smiled.
“Our marriage did not end on a positive note,” I continued, “and I don’t think I can work with him on a day to day basis. In fact, I left Virginia to get away from him.”
“You know, I’m standing right here,” DA chimed in.
“Captain Tyler, are you telling me you can’t put your differences aside to work together as a team? Even though I asked you as a personal favor?” The Colonel’s smile had vanished and there was now a warning in his tone.
“No, Sir.” I heard the warning and decided it was time to back off the fight. “I’ll try putting our differences aside to work together, but I can’t promise I won’t kill him in the process.”
The Colonel coughed out a chuckle. “That’s all I can ask for. Now, you—hopefully—have some time off before another call comes in. Why don’t you show Captain DA around?”
The Colonel spoke as I reached for the door handle. “I’m curious, off the record, of course. How did your marriage end? I remember the wedding. You two seemed so compatible and so in love. What happened?”
DA and I looked at each other for the first time since his arrival.
“He cheated on me with a friend of mine,” I replied baldly.
“I did not cheat on you! How many times do I have to say it before you believe me?” he retorted, all vestiges of professionalism gone.
“Oh, here we go again!” I shouted back. “I came home early, I walked into the kitchen and there was Alex on top of you on the kitchen floor.”
“I told you it wasn’t what it looked like. I have said over and over again that I did not sleep with Alex!” His tone increased until he was shouting, too.
“You’re telling me that you two never slept together?” I demanded an answer.
“Well . . .” He looked away from me. “Not while we were married.”
“I knew it!”
“It was after we were separated and you had moved here! What did you want me to do? Never sleep with anyone again?”
“You can sleep with whomever or whatever you want for all I care—”
“Ahem.” The Colonel cut in. I jerked back, startled; in the heat of arguing with my frustrating ex, I had forgotten my boss was there.
“Sorry, Sir. Do you see why I can’t work with him?”
The Colonel regarded us both. “Alex?” he questioned DA.
“Alexandra Keating, Sir. She was Stephanie’s best friend.”
“Best friend, my left toe! She’s a traitorous, backstabbing, two-faced, lying, husband stealing bitch.”
“Wow, that’s quite descriptive, Captain. Why don’t you tell us your true feelings about her?” Both of the Colonel’s eyebrows rose in shock.
“I’m only speaking the truth, Sir.” I addressed the Colonel but glared at DA.
“Well.” He clapped his hands together to signal the end of our bickering. “I know you two can be respectful when escorting a fallen soldier home and I know you will be professional during the dignified transfer ceremonies. However, please try and be professional at other times as well or at least civil to each other.” He waved us toward the door.
DA and I both nodded and exited the office. Before we could leave the reception area, the Colonel poked his head out of his office door.
“And, Captain Tyler-”
“Sir?”
“Try not to kill him, please. He just arrived at our base and it wouldn’t look good in the press.”
Knowing the Colonel had a wicked sense of humor, I still couldn’t find my own jocularity. “No promises, Sir, But I’ll give it my best shot.”
“That’s all I ask.”

Posted by Rachel Sharpe on July 2, 2015 in Thursday Thread