Today’s featured author is Dawn Ireland, who has written the novel, The Perfect Duke. 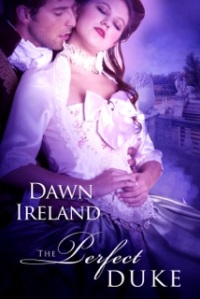 Known as The Marble Duke amongst the Ton, Garret Weston, the Duke of Kendal sets himself apart from his peers. Nothing will hinder his guilt-driven attempt to become a perfect duke. Nothing that is, save the alluring and imaginative betrothed he’d thought dead. His intended believes-of all things-that she is a Vicar’s daughter. The “perfect” duke needs a “perfect” duchess, but how was he to discern her suitability? Employing her as a governess to his niece seemed like an ideal solution. But whose “suitability” is being tested? His betrothed refuses to see he is beyond redemption. And most grievous of all, she stirs his blood, making him forget what’s important.

Cara believes fairy tales really can come true, until she meets the unrelenting and arrogant Duke of Kendal. He looks like a Prince, but acts like a Beast. Why must he challenge her at every turn? Her greatest peril is her attraction to the vulnerable, seductive man behind the title. A match between them would be impossible. But can she show him, without losing her heart that “perfect” is in the eye of the beholder?

“The horse seems to know you.”
“He should. There was a time when I practically lived in the stable. Storm was my favorite.”
“What happened?”
“I became a duke.”
“Oh.”
He straightened and forced his features into a mask of indifference. “So, Rachel loves horses.” He turned to face Cara. “I can appreciate my niece’s fondness, but I can not allow her to frequent the stable.”
“Why not?”
“It is not proper for young ladies of her station.”
“Garret, she’s a child.”
It was the first time she’d used his name, and somehow, Rachel visiting the horses didn’t seem like such a large request. “I will only allow it if she uses the passageway. At least I can keep the knowledge of her visits to a minimum. If you come with her, you will need to use the tunnel as well.”
“I can’t.”
“Why not?”
She blushed and turned away. “I’m afraid.” She said it so quietly, he wasn’t sure he heard her.
“Afraid? Of what?”
“Dark, enclosed places. Even as a child, I fell asleep with a candle burning.” She faced him and gave a small smile. “Perhaps I’m afraid that a beast will gobble me up in the dark.”
“There are no beasts at Belcraven, Miss McClure. I would not allow anyone to hurt you.”
“Anyone?”
“Never.” He started toward her and stopped. Damn, it would be better if he didn’t get close to her. As he left the stable, her whisper followed him.
“Not even you?”

Posted by Rachel Sharpe on August 28, 2014 in Thursday Thread

This week’s featured author is Neva Brown, who has written the novel, Casey’s Courage.

Love hunkers down and hides but abides until Casey and Tres realize life without love is just existing not really living.

Just as accomplished horse trainer Casey Mason, PhD feels she’s earned her independence, disaster strikes and her life is forever changed. She must put her life back together bit by piece. The obstacles and her old beliefs seem insurmountable; making her wonder if love can conquer all.

Jordan Spencer III (Tres) inherits Spencer Ranch where Casey, the riding buddy of his youth, still lives. Casey, a beautiful, complex woman, slips into his mind and heart. Bitter experiences make him shy away from a serious relationship with a woman; yet he and Casey have a special connection. As she struggles with her rehabilitation, he micromanages her life with quiet efficiency until he pushes her past some invisible line. When Casey disappears from his life, he learns more about himself than makes him comfortable. Coming to terms with the past so he can move on to a future with Casey is a challenge that tests his mettle.

Neva Brown, a retired secondary teacher/administrator, now enjoys the challenge of writing romance novels and doing editing for other romance writers. She has even ventured into the social media world of Facebook, Twitter and Google+ as well as having a website; nevabrown-author@weebly.com . Her family accepts her eccentricities with equanimity. Neva spent most of her life on West Texas ranches and uses that culture and environment in many of her stories. She and her husband now live at Rio Concho West in San Angelo, Texas. They enjoy visits from their two sons and their families, are always delighted to hear from old friends, and are amazed at how well they have adjusted to ‘city’ living. Neva loves to hear from her readers. She can be reached at joneva@suddenlink.net .

Posted by Rachel Sharpe on August 21, 2014 in Thursday Thread

The Power of Imagination

It’s amazing when you consider the impact of imagination. Imagination is idea – it cannot be seen, or heard, or felt, but the results of it are beyond compare.

The reason man has succeeded in many seemingly-impossible endeavors is imagination. It’s the reason the Wright Brothers invented the airplane, the reason Steve Jobs created the iPhone, and the reason Christiaan Barnard performed the first heart transplant.

Like every other part of the human body, the imagination must be exercised or it may become weakened or even lost. A great way to exercise imagination is through reading. There are books on every idea conceivable, and thanks to inventions like iPads, Kindles, and Nooks, books and the information they possess are easier than ever to obtain.

One of man’s greatest gifts may be wonderment – a feeling that leads him to seek out knowledge beyond his realm and a desire to use that knowledge to better himself and others. The results of human imagination into the 21st century have been staggering.

As we continue into this new century, new ideas and inventions will continue to arise. While some will be better than others, they will all come into existence, thanks to man and his unquenchable imagination.

Posted by Rachel Sharpe on August 15, 2014 in Reflections

Today’s featured author is CT Green, who has written the novel, The S.E.R.A. Files Vol II.

#1 SATISFYING SIMON
Will satisfaction be guaranteed?
For Serena Roberts, getting to know her new SERA partner is an uphill task. Simon’s distant and ‘by the book’ demeanor is at odds with his playboy past. Serena believes she’ll never find out the real story behind the torture Simon endured at the hands of a demon nor discover a way past the Fae warrior’s ice-cold reserve.
Simon doesn’t mind his reputation for being hard to please, but when he meets Serena he finds there is something he cares about more than keeping his distance from others. As they hunt for a kidnapper can he trust Serena enough to leave them both satisfied?

#2 PROTECTING PENELOPE
Angels and demons don’t mix. Prepare for an apocalypse.
Adar works as a special operative for SERA. He’s a demon who loves the thrill of close calls and blood-pounding action. But no way in hell is he ready to do protection detail for an angel. After all, everyone knows those guys are short tempered and deadly.
Penelope, a messenger angel, is minding her own business when she witnesses a crime. Now she’s under the care of a big, strong SERA agent and she’s determined to go for his heart. When the bad guys catch up with them and Adar is forced to unleash his inner demon, will the angel he’s fallen in love with still want him?

#3 CATCHING FLAME
A fire prince always knows how to light a girl’s fire.
Saskia “Sass” Boots has been watching Flame, and he’s every bit as absorbing as his namesake. But as an agent with SERA, she’s determined to keep her mind on the job and off the fire prince’s smokin’ hot body. A pyromaniac’s on the loose and Flame is SERA’s top suspect.
When Sass announces she’s moving in with him, Flame knows it’s going to be hard to resist the girl of his dreams while chasing a murderer. There’s no way Flame is going to let some creep kill innocent people, but when things become heated, the scorching chemistry between him and Sass might prove a fatal distraction.

#4 TOUCHING TORREN
SERA Agent. Werewolf. Guard Dog. No one said anything about ‘walkies’.
After Sophy Bancroft is blinded by a spell, Torren is determined to protect the human from a killer still at large. But for a werewolf, playing at being a guard dog is tough work. He hates deceiving the woman he’s fallen in love with, but until Sophy’s sight returns there’s no other way to ensure her safety.
Sophy’s delighted to regain her vision. When she discovers her beloved canine companion is a seriously gorgeous werewolf will she be able to trust him not to shed on the furniture, and more importantly, save her from the creature determined to end her life?

#5 AFTER OBLIVION
Not even Hell itself is going to keep these lovers apart.
Mia Haviland and Avenian of the Fae mourned the loss of Oblivion, the demon prince who bound the three of them together. Now their lover is back and determined to re-take his place in Mia and Aven’s life.
Oblivion endured two years in Hell, imprisoned and tortured by a sadistic killer who escaped SERA’s justice. Now he wants his beloved Fairy and Fae back by his side and his captor’s head on a platter. Can he destroy his nemesis and convince Aven and Mia that neither Hell nor high water will ever keep him from them again?

Posted by Rachel Sharpe on August 14, 2014 in Thursday Thread

Today’s featured author is SC Mitchell, who has written the novel, Son of Thunder.

One Line Hook: The son of Thor has a lot to live up to, and no time for love.

The Heavenly War begins!
A prophecy centering on a mortal woman, makes her the focus of events that could lead to Ragnarok, the Twilight of the Norse Gods and the end of the world.

Know this. The Son of Thunder and this daughter of Midgaard will venture to the lands of Svartalheim and Jotunheim, to the very bowels of Utgard Keep. The power of the three artifacts will be reunited and the old ways will pass. A secret from the past is the key to the future, but a life must be freely given if the Golden City is to be saved.

From the icy wastelands of Svartalheim, land of the dark elves, to the towering peaks of Jotunheim, home of the frost giants, and right to the golden gates of Asgaard, the saga begins as war ravages the heavens.

Son of Thunder is the first in the Heavenly War Series, a combination of fantasy, mythology and romantic adventure.

Jord Thorson was a god– the son of Thor, the Norse God of Thunder. In his search to find his missing father, Jord seeks out the mortal, Meghan Larson, who is in possession of his only clue–Megingjörð, Thor’s magical belt of power.

But when the belt decides to take matters into its own hands, locking itself around Meghan’s waist, Jord and Meghan are plunged into the middle of a massive conflict that rages across the heavens.

Giants, magical artifacts, and a golden city in the clouds weren’t exactly what Meghan Larson expected when that amazing belt arrived at her museum. Now Megingjörð is stuck around her waist and talking to her in her head. She’s got to be dreaming, but with the wonders around her and hunky Jord Thorson at her side, Meghan’s not sure she wants to wake up.

Son of Thunder, available at: http://www.amazon.com/Son-Thunder-Heavenly-Series-ebook/dp/B00BJ64GPY

S. C. Mitchell is also the author of Swiftly Beats the Heart, There’s no such thing as Werewolves, The Forsaken Templar, and Seeds of Immortality.

Posted by Rachel Sharpe on August 7, 2014 in Thursday Thread